Damanhur Education APS was founded in 2000 as the operational arm of the Eco-village Damanhur to foster education and sustainability awareness.

The organization started out as an association for home schooling and adult education with a strong accent on ethics and sustainability. In the first years especially children education was the priority. The family school organized many events and actions to support the Millennium Goals and the Sustainable Development Goals of the United Nations.

In 2015 the eco-school moved to another damanhurian association more suited to the needs of the community and Damanhur Education APS shifted the focus to adult education and actions and events to support education to sustainability and the SDSs of the United Nations.

The Students of the Damanhur School participated in a project to safeguard the forests of Nicaragua, in collaboration with RE.TE, an NGO that promotes eco-conscious international development projects, and the ASN (Ambiente Storia Natura - Environment History Nature) Association. The students became owners of a threatened portion of land by protecting it from destruction and preserving its biodiversity. 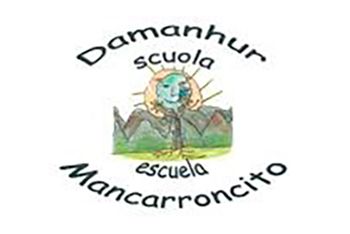 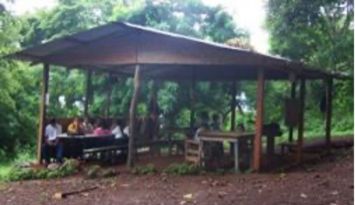 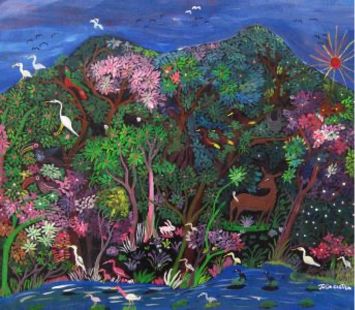 The students held several fundraisers, including a market for second-hand items. With the money raised, they became owners of one and a half hectares of tropical forest on the island of Mancarroncito. This island in Lake Nicaragua has been designated a national monument for its historical and environmental importance. The acquired land was given to the local population.

The students have maintained friendships with the Mancarroncito students, frequently exchanging letters, drawings, and artwork. This ongoing interaction between our students and the Nicaraguan ones has created a feeling of shared friendship across the globe.

The students from the Middle School built a miniature Ecological House with functioning elements and real life materials. The house has working solar panels, a small greenhouse with real plants inside, and a rain catchment system.

The Center for Environmental Education at Ivrea chose the project as a laboratory experience for many schools in the area. Students from these schools came to the Damanhur School, and our students explained the theoretical principles of the Eco House and instructed them in the process of making the house.

The students scripted a theatre sketch to explain the values connected to ecological construction. They presented the sketch at the Environmental Museum of Turin during World Environment Day.

The project Eco House was awarded the Green Flag from the Foundation for Environmental Education. 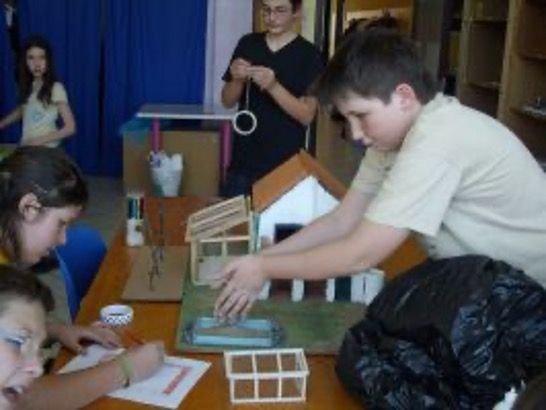 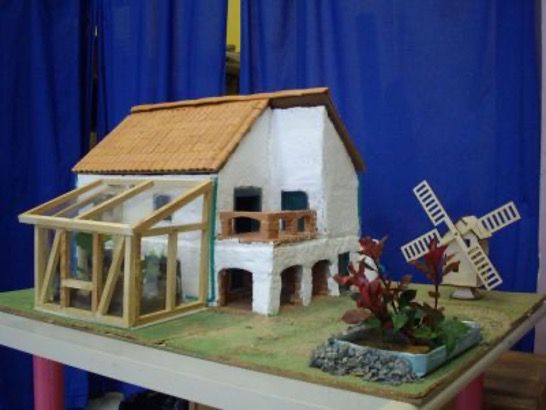 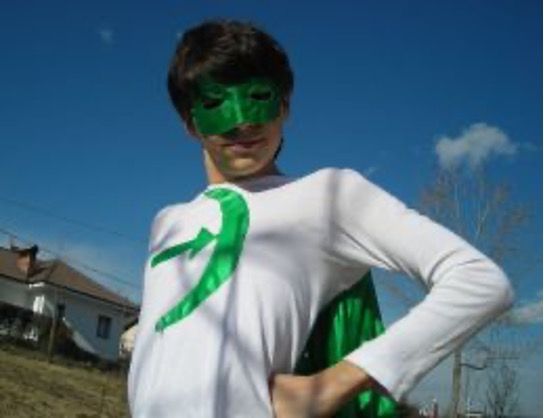 Tree For  a Friend

The Damanhur School students made the project ‘A Tree for a Friend’ for Eco School 2007. They focused on preventing deforestation, participating in diverse activities in the region surrounding the school. This area, Canavese, once had abundant forests, although now the land is threatened by deforestation.

The objective of protecting the forestlands parallels the Mancarroncito, Nicaragua project, in which we collaborated with local residents on the island of Mancarroncito in to protect their forests.
The students learned that forestlands are like vast schools of life that have a deep history and richness. They learned about the abundance of organic materials such as wood that the forest provides, as well as the importance of understanding the relationship between nature and technology.

Phases of the project include...
• Participating in art and poetry laboratories about trees to develop an emotional rapport with the natural world.
• Experience of sensory contact with trees in the neighboring woods
• Visiting the Department of Forestry to research transplanting trees, and meeting with the Mayor of Vidracco to ask permission and sponsorship
• Organizing a fundraiser with proceeds donated to the Mancarroncito project, supporting eco-sustainable development and the children’s education
• Distributing material about the Tree for a Friend project at Environment Day

• Meeting with an expert biologist in a Music of the Plants laboratory
• Learning about the phases of seed germination and the purifying power of plants in laboratory experiences
• Planting trees with the assistance of the Department of Forestry and expert gardeners in the local area. 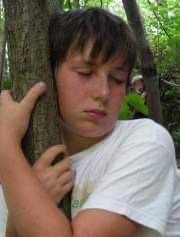 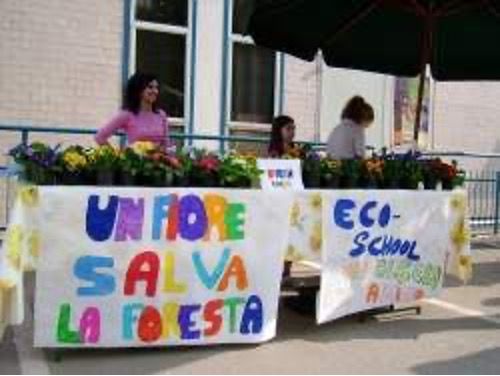 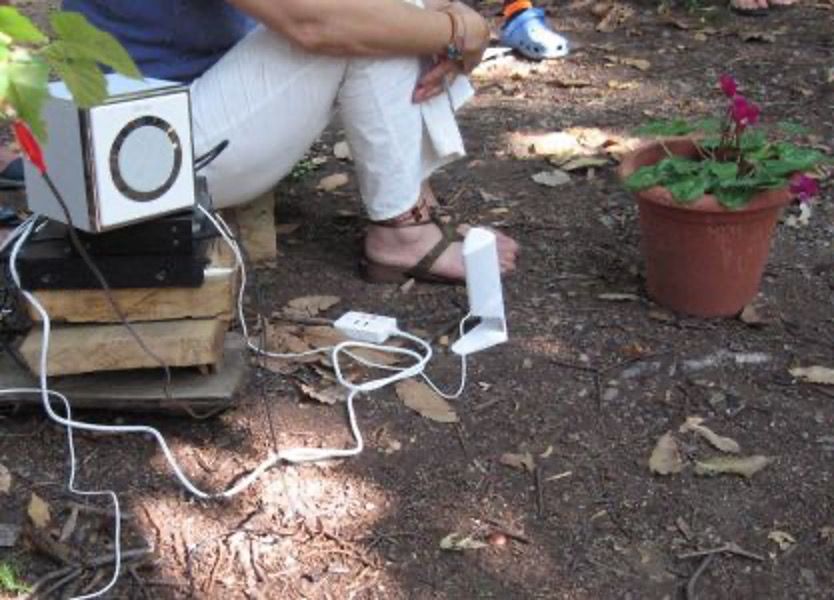 The students of the Damanhurian school went on a journey aboard the Greenpeace vessel The Rainbow Warrior.

The ship arrived in Genova for a brief stop during its Mediterranean tour on a campaign to protect marine reserves, and the students joined them for a two-day educational experience.

Greenpeace activists had previously come to visit the school and speak to the students about their work to create a protected zone in the Mediterranean. The speakers presented two films about the campaign and shared information about how nets that are often illegal present a threat to many sea animals, from the sardine to the whale.
The adventure aboard the Rainbow Warrior has been an intense occasion for the students to witness the work of environmental activists and deepen their understanding of the Greenpeace ocean campaign. 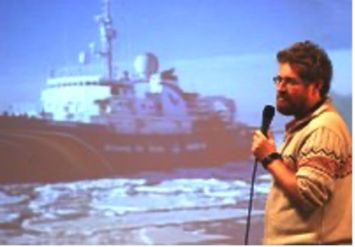 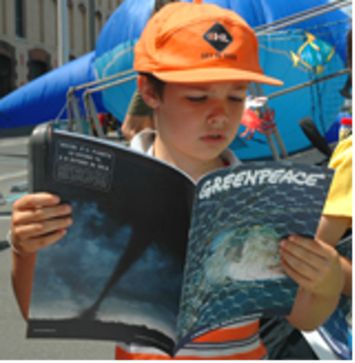 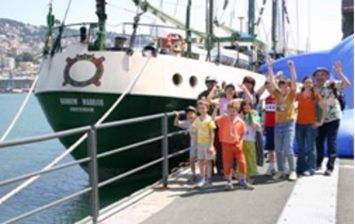 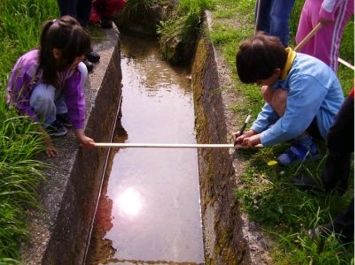 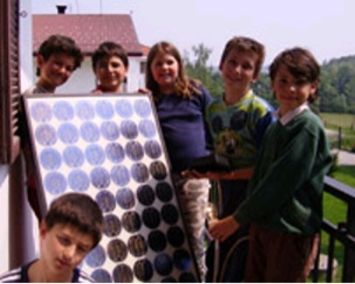 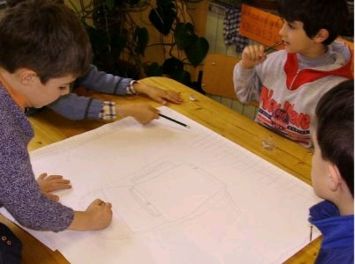 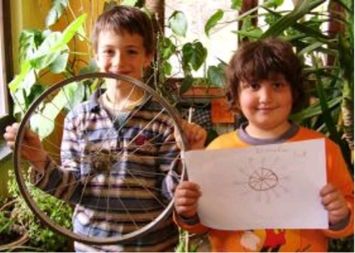 The students experimented and learned about renewable energy for Eco School 2005. Their objective was to create electrical energy from environmentally friendly and economic sources.

Damanhur is a place with extensive renewable energy systems, such as solar and photovoltaic panels. Most of the students were familiar with these systems from their homes in the community. This project served to deepen their technological knowledge

The students conducted research about various systems, and they studied the school, its land and building structures, with the intention of building similar renewable energy structures at the school.
The project was divided into three sub-projects, adapted for each age group.

One group used solar and photovoltaic panels to produce electrical energy and illuminate the classrooms. The students made models to better understand how the panels function, then used the energy produced in the students conducted research on various systems, and studied the school, its grounds, and building structures, with the intention of building similar renewable energy facilities at the school.
The project was divided into three subprojects, tailored to each age group.

One group used solar and photovoltaic panels to generate electricity and light the classrooms. Students made models to better understand how the panels work, then used the energy produced in various projects.

Another group built a water mill in a nearby creek to produce electricity. The water mill was connected to a generator to store energy, enough to run small appliances.

Another group built a water mill in a nearby creek to produce electricity. The water mill was connected to a generator to store energy, which was enough to run small appliances.

The youngest group created a system using a bicycle wheel connected to a generator to produce electrical energy and illuminate the classroom in the case of a blackout.

A Poster for Peace

Since the beginning of the Damanhur School the culture of world peace was promoted.

Amongst the various activities and initiatives for peace that the children have participated in is ‘A Poster for Peace,’ part of the Lions International Conference. This event began in 1988 and invites children ages 11 to 13 years old to express themselves on the theme of peace. More than three million children from 75 different countries have taken part in the conference.

The students shared their vision of peace through their art, interpreting the theme with creativity and originality. Mirò Olami won first place during the 2007 – 2008 conference. In the 2006 – 2007 conference, Sofia Venturelli was awarded first place at the school level and 25th in the regional competition.

The school has participated in many other initiatives that support world peace, including international assistance for countries in a state of emergency. The school received a certificate of merit for its participation in "Operation Smile," a project to support orphaned and handicapped children after a major flood in Romania in July 2005. Damanhur School students raised funds, food, clothes and toys to send to Romanian children in need as a result of the flood. 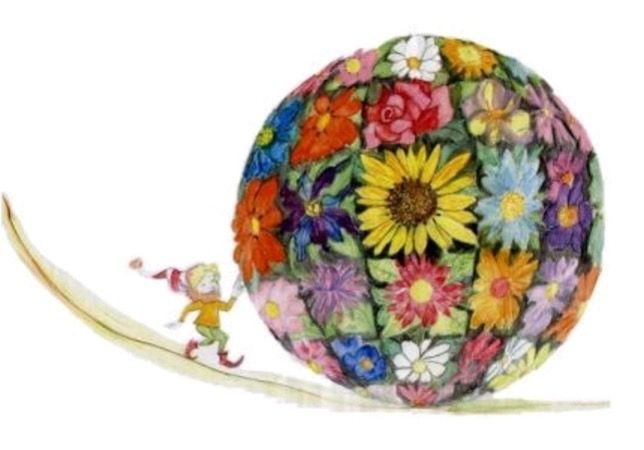 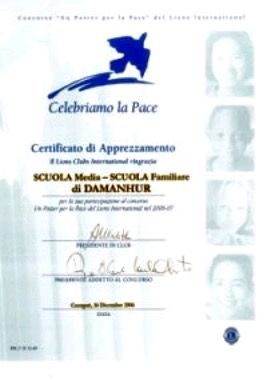 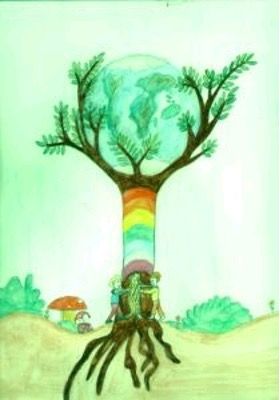 Damanhur Eco School has been awarded:

Certificate of Appreciation from the Ambassador of Nicaragua in Rome for cooperation in the work to develop and safeguard the forests on the island of Mancarroncito, 16 October 2008.

“A pathway of formation to safeguard the earth and international cooperation with the Rio Foundation,” by the 1st, 2nd, 3rd and 4th grade Elementary School classes,” 2005 / 2006.

Prize for participation in the 11th Edition of the Literary Conference, “Nino Colombo,” “Yesterday I dreamed that ...” organized by the town of Beinasco (Turin), awarded to Maela Confalonieri, Middle School 1st level, December 2007.

Merit Certificate from the City of Vidracco, the City of Baldissero and the FEE Italy for the effort to protect the environment, 2006.

Merit Certificate from the City of Castellamonte for “Operation Rainbow,” a project to help sustain children with severe handicaps and to give assistance during the emergency flood in Romania, July 2005.

The Golden Heart Award, given by “Green Heron,” Arci Gassino (Turin), for having saved a “Cenerino” Heron, 2002.

Certificate of Appreciation from the Lions Club International for our school’s artwork awarded at the “Poster for Peace” event.